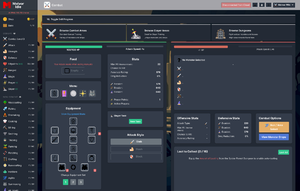 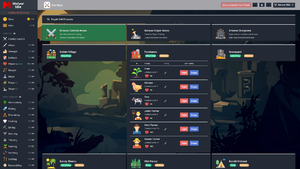 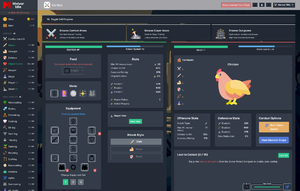 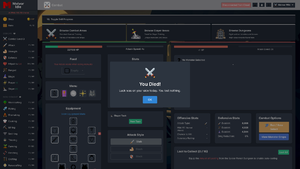 Combat involves fighting various monsters throughout the combat areas, slayer areas, and dungeons of Melvor. Food and Equipment cannot be changed while in a dungeon unless an upgrade has been purchased from the shop.

To fight monsters navigate to the combat page by selecting any combat skill from the left menu. The combat page contains three tabs containing the locations where monsters can be fought, above a section for equipment and combat stats. Browse combat areas, slayer areas, or dungeons to reveal a menu containing all the relevant locations. Selecting a location will display the enemies which can be found there, along with their Hitpoints, Combat Level, and Attack Type. Selecting "Fight" will begin combat. Combat will continue until the player runs, dies, or defeats the dungeon. Enemies are fought automatically. Combat skills can not be trained in offline mode.

Combat skills are leveled by damaging enemies with weapons, and magic. To train a specific combat skill match the Attack Style icon with the relevant combat skill. The available Attack Styles will change depending on the type of weapon equipped. Most combat skills have a passive effect even when the relevant style is not selected. Weapons, armour, and food can be equipped for use by selecting them in the Bank. Weapons and armour provide bonuses and penalties to combat stats, while food can be used for healing in combat.

After each kill, it will take 3 seconds for the next monster to spawn.

All monsters killed in combat and slayer areas will drop bones upon death, with a chance for additional loot based on the monster's type. The "Drops" option will display the possible loot drops a monster can give.

Any items enemies drop upon death must be looted manually by selecting "Loot All" or the item itself, unless the

Amulet of Looting is equipped. If there are more than 100 stacks of loot, the oldest drop disappears. Bones stack and do not time out like other drops. Other drops do not stack even if they are of the same type.

Slayer Tasks. The God Dungeons are an exception to this rule: the shards are rewarded after each killed monster. When the last monster in a dungeon is killed, the player will be given a reward that is sent to the Bank automatically.

Malcs, the Guardian of Melvor and

Prat, the Protector of Secrets from the

Volcanic Cave, and all of the monsters from the four god dungeons. The attack bar will change to yellow when a special attack is being used.

Hitpoints experience is gained at a rate of 0.133 experience per damage dealt regardless of the combat style being used.

Prayer experience per damage dealt per prayer point spent on prayers that affected the attack. For example, if

Steel Skin (3 prayer point cost) is active, each attack made will generate 0.1 extra experience per damage dealt. Only prayers such as

Protect from Magic that say 'Provides no extra Prayer XP' will not contribute towards this experience bonus.

All of the above experience will be multiplied by 1.04 while a

Slayer Experience cannot be increased by the

Gold Emerald Ring, however the various pieces of Slayer Equipment that can be purchased from the Shop using

Receiving damage that would bring the player's total

Hitpoints to 0 or below will cause the player to die. Upon death a random equipment slot is selected, any Equipment within the selected slot will be lost forever (unless the

Protect Item prayer is active). If either ammunition or Summoning tablets are lost, the entire stack - regardless of size - will be forfeited. Only non-food items that have been equipped in an active slot can be lost upon death.

All items equipped have an equal chance of being lost. When the death penalty rolls to determine which item is lost, it starts by rolling a random equipment slot. If the player has nothing equipped in that slot (For example, if they are using Melee and do not have any Ammo equipped) nothing will be lost, and a message saying "Luck was on your side today. You lost nothing." will appear.

The first formula is used to calculate the player's Base Combat Level.

The second set of formulas are used to calculate the player's Offensive Combat Levels, only the highest result is used.

The third formula is used to calculate the player's Combat Level, rounded down to the nearest whole number.

Stun, also known as freeze, is a status effect that can be inflicted by both players and monsters. Stun can be applied for a number of turns by a special attack or a normal attack by the player if the

Fighter Amulet is equipped. When an attack applies stun the current attack of the target is interrupted, including special attacks that are in progress. If the target is already stunned, it will not be applied again. When stunned, a stun timer counts down with a period equivalent to the target's attack speed. On completion of the timer the number of stun turns is decreased by one, and the status is removed if the resulting amount is zero. In addition to not being able to attack while stunned, a character cannot evade any attacks.

While a player or monster is stunned, they take 30% more damage.

While a player or monster is asleep, they take 20% more damage.

The calculation used to determine the player's accuracy rating is broadly the same for all combat styles, with some parameters varying depending on the player's current attack type and style:

The first formula is used to determine the player's effective skill level:

Next, the base accuracy bonus should be calculated. This is the sum of the relevant attack bonus statistic provided by all currently equipped equipment (as seen in the Equipment Stats interface), plus:

Surge spells from the standard magic spellbook, this modifier is increased by a further 6%.

Finally, the player's accuracy rating can then be calculated as:

Otherwise, the attacker's Accuracy Rating is higher than or equal to the target's Evasion Rating, and the formula is instead:

Strength level for the melee max hit, or the effective

Given these figures, the base max hit (i.e. max hit before modifiers) is then calculated as:

This base max hit is then adjusted by the percentage and flat max hit modifiers to arrive at the final max hit figure, where the modifiers include both global max hit increases as well as increases specific to the relevant attack type:

The player's Max Hit with spells changes depending on the spell being used. A spell's max hit is listed in the spell's description and is different for every spell. Magic Damage Bonus can be found in the Equipment Stats interface.

For Ancient Magick spells the max hit is simply as stated in the spell's description, and cannot be increased by the Magic Damage Bonus stat or any max hit modifiers - only the Combat Triangle damage bonus/penalty applies.

For standard spells, first determine the max hit stated in the spell's description along with the player's effective

Magic level by using the same effective level formula as Melee and Ranged max hit does. The base max hit is then:

This base max hit is then adjusted by the percentage and flat max hit modifiers to arrive at the final max hit figure, where the modifiers include both global and magic max hit increases. Any damage increases with the same element as the spell being used (such as that provided by the

The minimum hit calculation for normal attacks is therefore:

When the player hits with a normal attack, the game calculates how much damage the player actually does by rolling a number between their minimum hit and maximum hit for the chosen combat style and then applying post-roll modifiers.

Some effects are applied after the damage roll is done. The main two are enemy Damage Reduction and Player Modifiers that affect damage to all monsters or to a subset of monsters such as Slayer Monsters or Boss Monsters. These modifiers can increase the player's damage beyond their listed maximum hit.

Ancient Magick spells are not affected by post-roll modifiers aside from enemy Damage Reduction, although weapon special attacks that do a fixed amount of damage are.

Damage Reduction (often abbreviated as 'DR') is a stat that does exactly what it suggests: It reduces the amount of damage taken by a player or monster. Unlike other combat numbers that are complex calculations, a player's damage reduction is determined by simply adding together all damage reduction bonuses the player has, whether from equipment or something else like a

Whenever a player or monster with Damage Reduction greater than 0% would receive damage, instead the damage the damage they take is equal to:

Note that the Combat Triangle will affect how much damage reduction the player has if they are using a different style from the monster.

With specific pieces of equipment, there is a chance that hits dealt by the player may become critical. When a critical hit occurs, any damage dealt by that hit will be increased by 50% - this increase is multiplicative with any other damage increasing bonuses currently in effect.

The player's critical chance starts at 0% (at which point critical hits do not occur), and can be increased by the following:

Damage Per Hit, Average Hit, and Damage Per Second

Damage Reduction is applied after this initial damage per hit is calculated, which means it is possible for a player to deal less than their minimum hit against a monster that has Damage Reduction.

The player's average hit is thus:

And their damage per second can be calculated as:

The calculation used to determine the player's evasion rating varies depending on the attack type the player is defending against. Each requires the calculation of effective skill levels, the formula for which is as follows:

In addition, the player's evasion modifier need to be known. This is the sum of all global evasion rating and the relevant attack type's evasion rating increases, provided from places such as Potions,

Melee evasion rating, or the ranged defence bonus for the

Ranged evasion rating. These stats can be found in the Equipment Stats interface.

Given this, the evasion rating is then:

The calculation for Magic evasion is slightly different from that for Melee and Ranged. The defence bonus used should naturally be the magic defence bonus. In addition, the effective defence level becomes a calculation that factors in both the player's effective Defence and Magic levels:

Then the magic evasion rating becomes: