This article is about training the Summoning skill. For the skill itself, see Summoning.

Marks are the first thing you need to get in Summoning. At level 1, the options are

Once the first Mark for a given Familiar has been found, the player will not find any more marks until they create at least one Summoning Tablet for that familiar.

The average time to acquire marks varies with both the tier of the summoning familiar and whether the player has that familiar equipped. The average times shown below are excluding any downtime such as waiting for ore to respawn in

Thieving, and time waiting for Monsters to respawn in

Mark Chance is based on fastest possible interval for artisan skills, so having all upgrades will increase your chances - the interval for these skills are based on the following:

For tips on how to maximise the chance of discovering marks, see Maximising Mark Discovery Chance. 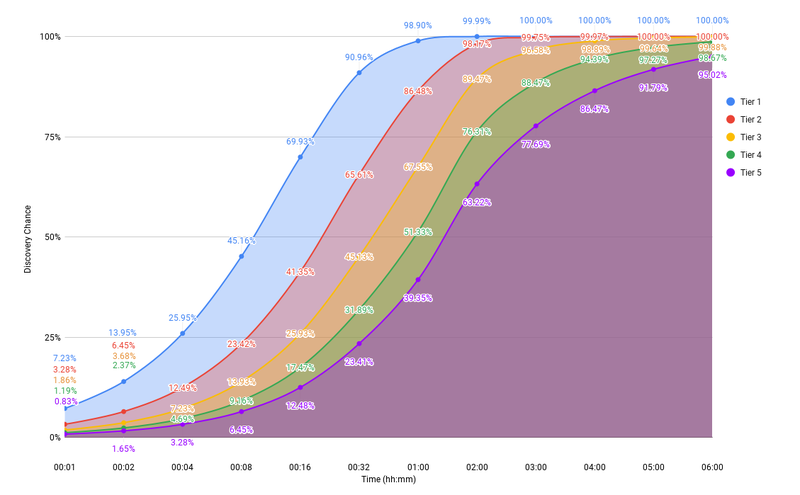 Chance of acquiring Summoning marks of each tier over time, assuming that the familiar whose marks are being discovered is not equipped.

Once you have your first mark you can start creating tablets in the familiars tab of the Summoning page.

Each tablet will have multiple recipes to create, so make sure you check them all for a recipe that suits you. Each recipe consumes shards, which can be purchased from the in game Shop.

Using tablets on the skill you acquired the mark from grants Summoning XP, and much more XP than creating tablets so using tablets is the quicker method of gaining Summoning levels. The XP/second gained increases with the Summoning level required for that familiar, and uses the following formula:

As is the case with Marks, certain skills used a fixed value for the action time when determining the amount of XP gained per tablet.

If using a synergy, simply apply this formula once for each tablet used - in most cases, this will be 2 tablets used for one familiar, and 1 for the other.

Having multiple familiars of at least level 2 or higher will start to unlock Synergies. Synergies grant additional bonuses over those given by using the familiars by themselves, as well as more XP per action.

For the best XP rates, it is suggested to unlock these synergies as soon as you can by leveling up marks. Higher tier (2 and 3) familiars need higher mark levels for their synergies to unlock than tier 1 familiars, but again these award more XP.

For the non-shard items, before cost reductions, a total of

1,000 worth of items needs to be supplied per craft, with the exception that items that have a value before

20 are considered to have a value of

20. In the case of items that can be bought via the Township Trading Post, it is much more cost-efficient efficient to buy the cheapest resource, that is, to buy Normal Logs, Garum Herbs, Copper Ore, and Bronze Bars to make Ent, Mole, Bear and Salamander tablets. This strategy does not apply to Food items - the player should instead buy high-tier food items from the Trader.