Welcome to the next Major Update for Melvor Idle! And the first update with a title - Welcome to Melvor

Alpha v0.10 is the largest update I have released to date for this game. Many additions have been included which will set the path this game will take from here on. Thank you to everyone who has been here on this journey with me. I hope I can continue to provide updates to this game that everyone will enjoy.

Now, let's see what the big inclusions are. 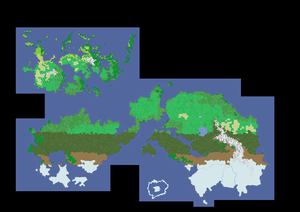 The Map of Melvor.

A vast, mystical landscape that is just waiting to be explored. Traverse the harsh lands and encountered various enemies and dungeons which await your arrival.

This map will represent Melvor as a whole. Finally adding world-building elements to the game is a big step in creating something interesting. It allows for so many possibilities in the future, which I am excited to share with you all.

Combat Area selection has been changed to physical locations that you can select from the map. The black sections of the map represent unexplored territory. Who knows what we will find out there?

Magic has been added to the game!!

In its current state,

Magic is solely a

Combat skill, designed to output high damage, whilst trading your defence in return.

There are currently 20 damage-dealing skills to use in

Combat. You are required to wield a

magical staff to use

Magic (will touch on this below).

Magic are to also add buff/debuff spells alongside non-combat

Magic skills like Alching and Enchantment. Watch this skill closely as it develops!

You are required to equip a

magical staff to use

Runes?? Here we have

Runecrafting - a very basic, yet important skill for those who wish to train

Rune Essence you collect from

Mining, which can be then used in

Combat to gain an advantage over enemies.

Fire Runes can be upgraded in the Bank to produce a

staffs can be upgraded further to provide more benefits.

Now that we have all three

Combat skills/types in the game, the implementation of the Combat Triangle as also been included.

When you face an enemy in

Combat, you will now see that they have an 'Attack Type'. This can either be

Magic. This determines the evasion statistic that will be used in combat.

For example - if you are facing an enemy with the

Ranged attack type, your Ranged Evasion Rating will be used as your 'Defence'. This is the same for enemies, based on your Attack Type.

The general rule of thumb is

Melee. But this also depends on the gear you have equipped.

They're here, they're finally here! For those of you who love to brag, these are just the thing for you.

Skillcapes are somewhat of a 'Trophy' that you can acquire upon reaching Level 99 in its respective skill. Once you reach that glorious max level, the Shop will allow you to purchase the Skillcape for

Each Skillcape comes with its own unique benefit for the skill it is acquired for. Skillcapes also provide base

Magic Defence stats of +9. If you manage to lose your Skillcape in battle, you may purchase another one from the shop.

Who can collect them all?